If you want a revolution, you better spend some time planning the event! 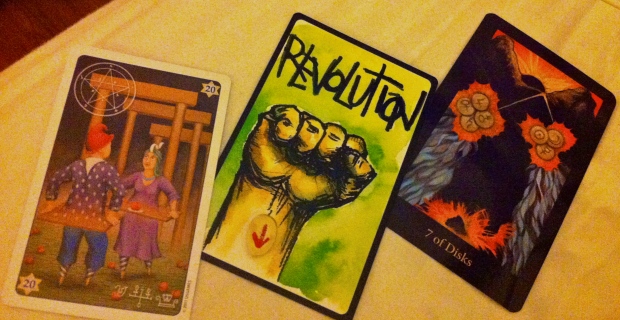 This week’s Global Forecast consists of 3 cards from various decks, and a rune. Initially I pulled card number 20 Communication / Negotiation from the King Solomon Oracle Cards deck, followed by the Revolution card from the Dirty Tarot oracle. Tension!

While the King Solomon oracle suggest taking time to plan, think through, deliberate and only then approach the target patiently, Revolution thrusts forward with ideological immediacy. I foresee a dance of anxiety — wanting to produce, change, and evolve, but understanding that time isn’t right. Logic is possible, but not enjoyable. And this week ain’t going to be about joy, or about logic per-se. It’s about personal spiritual space. And indecision. And being OK with it.

The third card I pulled is 7 of Disks from the exquisite Mary-El tarot. Indeed, this card is a blessing. A possibility to achieve something wonderful and tangible. However, along with the inverted Teiwaz rune , the meaning of the first two cards is being reinforced: In order to make magic without, we must descend into the depths of ourselves to dwell in the magic within.

In less poetic and artsy terms, I think fusion is the right approach. If you feel like the tension in the atmosphere is becoming somewhat violent, instead of going from 0 — Bitch in a nanosecond, take a break — you are allowed! Fuse that anger, that irritation. Wrap it around itself, sit with it, attempt a spiritual macrame project. And remember, you are not alone. I think we all will need to fight the heady agitated spaces, allowing some quiet time of indecision.

I remember, as a teenager in a country where English is only a second language, listening to the good ol’ Dire Straits, and pondering the meaning of the title “Brothers” in “Arms,” not knowing that the word arms meant not only an embrace, but also weapons. Thinking about this week’s prediction brings a new light to my concept of “Brothers in Arms” — learning to project an embrace onto personal weapons — layering meanings of two impossibles, forces me to take time negotiating my own truth.

One thought on “Brothers in Arms — a weekly, multi-oracle, global forecast”

The Maven of Cowrie Moon

Style is inborn attitude | So is #integrity 👸🏻madamenadia

Under the Moon — Categories

Error: Twitter did not respond. Please wait a few minutes and refresh this page.